Montego Bay is the tourism mecca of Jamaica for many years and continues to be so. When Christopher Columbus first landed there he named it Golfo de Buen Tiempo, ('Fair Weather Gulf'). However back then Montego Bay had many wild pigs roaming the area which were slaughtered and the fat was shipped away to be made into lard. The Spanish name for lard is “Manteca” which was how Montego Bay was called then. The English came along in 1655 and captured Jamaica from the Spaniard and the word Manteca got corrupted and mispronounced to Montego.

The first tourist attraction in Montego Bay was the Doctors Cave Beach originally owned by Dr. Alexander James McCathy. In 1906 Dr. McCathy donated the beach to the Montego Bay Community to which a private member club was formed that still exists today. However, it was in 1920 that Montego Bay took on world prominence as a tourist destination.  Sir Herbert Barker and English Osteopath wrote an article about the curative effects of the Doctors Cave Beach and instantaneously visitors from all walks of life flocked Montego Bay to experience this mystical waters.

If you decided to visit Jamaica, choosing Montego Bay as your destination is a good idea. After all you will be close to the airport and Montego Bay is placed at a perfect location between two major resort towns Negril and Ocho Rios. A day tour to both of these places is a great way to enhance your vacation while getting to know the island and its people better. Ocho Rios famous for the Dunn’s River Falls, Green Grotto Caves, Bobsled at Mystic Mountains, and Dolphin Coves among other things. Negril on the other hand is most noted for its seven mile white sand beach and cliff diving at the Rick’s Café. 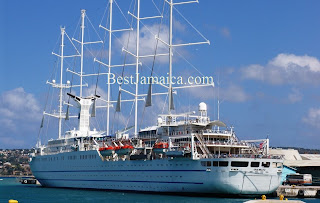 Come and enjoy Jamaica, relish in the sights, sounds and taste. Dance the night away to the beat of reggae and toast with the taste of any of Jamaica’s premier rum. Bask on any of the beaches where the water is crystal clear and the sand is powder soft.  Plunge in any of the beautiful waterfalls and rejuvenate the heart, mind and soul. It doesn’t matter what your interests are, Jamaica has something for everyone.
By Jamaica Best Transportation
Email ThisBlogThis!Share to TwitterShare to FacebookShare to Pinterest
Newer Post Older Post Home